The ultimate formal wear. Perfect for your wedding or a luxurious black-tie event, the tuxedo is something every modern gentleman will wear at least once in their life. It is believed that the design of the Tuxedo was created by the Prince of Wales (who later became King Edward XII), and introduced it through his own Saville Row tailor,

Henry Poole & Co. to a fellow American, James Brown Potter who was vacationing in England at the time. Mr. Potter wore this outfit to a ball at the Tuxedo Park Club in New York, where it was a major success and went on to become the official outfit of the club which bore the same name: The Tuxedo.

We never want to hear a word like “rental” next to such a prestigious outfit as a Tuxedo! 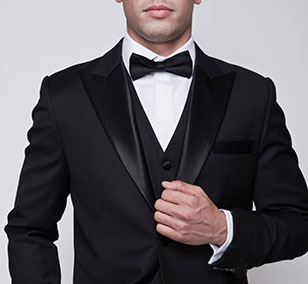 Dressed To The Nines

Needless to say here at Suitly, we never want to hear a word like “rental” next to such a prestigious outfit as a Tuxedo! We make it possible to have a great fitting, quality custom tailored tuxedo at a fraction of the cost of even buying ready-to-wear one! Your special day should deserve no less attention to detail!